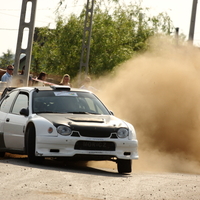 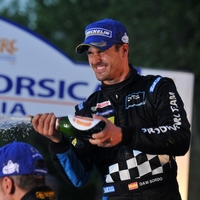 Followed in the classification Miguel Nunes / Victor Draft another Mitsubishi Lancer Evo 10, third place belonged to João Magalhães / Jorge Pereira to 2.7 seconds and 5.9 seconds of Miguel Antonio. Were ranked fourth paragraphs, Philip Davis / Daniel Figueroa in another Lancer Evo 10. Duarte Ramos and Luis Ramos in another Lancer, but this being an Evolution 9, were on the 5th. Filipe Pires / Vasco Mendonça Citroen C2 were in the 6th ranked, first of the two-wheel drive, Group A and Engineer Rafael Costa. In Renault Clio R3, Isabel Ramos / Rubina Gill was the 7th overall and first ladies.

André Silva and Jorge Gonçalves was the 8th overall in Citroen C2, Sofia Correia / Rui Rodrigues were also in the 9th overall and closed the Citroen C2 Top 10 Bruno Fernandes / Mauro Sousa Toyota Yaris in, recall that Bruno Fernandes (at your option) no scores for Trophy Yaris. So Marco and Helder Nobrega Nobrega make the first trophy Yaris / Ecobasalto. Ricardo Gonçalves / Artur France is the 2nd Trophy and 12th overall. Gonçalo Freitas / Enio Andrade are third Trophy / 13 overall. Capelo Daniel and Paul Teixeira are 4 of the trophy and 14 overall, Luis Freitas / Orlando Teixeira is 5 of the trophy / 15 of the general. Ivo Sardine / Sardine Ilídio (no score for the trophy Yaris) were 16th overall, and finished, Ricardo Freitas / Valdemiro Garcês were 17th overall and 6th in Trophy.

Francisco Tavares / Luis Neves are the winners of the Open Rally Calheta. The pair of spectacular Toyota Corolla won 8 of 10 special that made up the rally.

Gabriel Fernandes and well that Hugo Freitas tried but failed to take the Citroen Ax to the first position of the Open, yet the pair got the better of Francisco Tavares on the second pass by Santa. In the third position of the Open, John Nobrega and Nuno Martins in Toyota Starlet, the duo walked Ourolux the fight with Peter M / Gonçalo Rocha also in Toyota Starlet, were ranked the 4th.